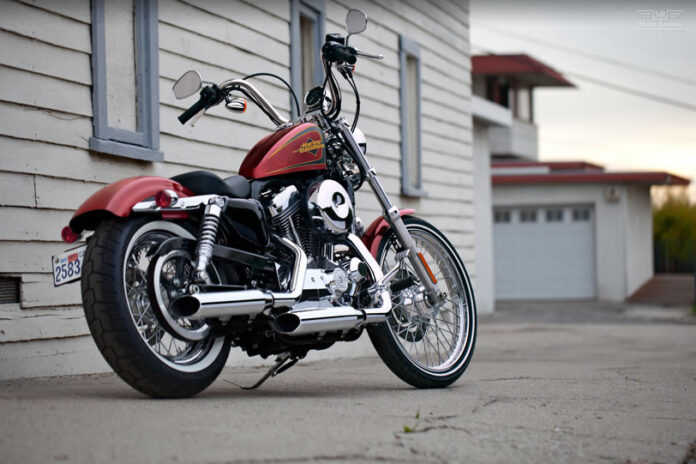 MILWAUKEE (February 1, 2012) – The Harley-Davidson® Seventy-Two™ motorcycle is a metal flake dream machine, a Sportster® on a trip back to the days when the cool kids rode a Sting-Ray and the big boys parked choppers in a row on the curb.

Those motorcycles were long and lean; candy-apple color and gleaming chrome shimmering in hazy summer sunlight. From its Hard Candy Big Red Flake paint and ape bars to its narrow whitewall tires, the Seventy-Two is a respectful nod to that era, and to the influence of the custom culture that still percolates today along Whittier Boulevard, the legendary cruising street in East Los Angeles also known as Route 72. A new generation of custom builder is tapping into that era and making a fresh statement, not just in California but in garages across the country, even around the world.

“In creating the Seventy-Two, we were also inspired by the vibe of the early chopper era,” says Frank Savage, Harley-Davidson Manager of Industrial Design. “Those bikes were colorful and chromed, but also narrow and stripped down to the essentials. You look at period examples and they are almost as simple as a bicycle. It’s a custom style that’s very particular to America and that California scene.” Metal flake, an iconic design element of the ‘70s, appeared in everything from dune buggy gel coat to vinyl diner upholstery, and on custom motorcycles. Harley-Davidson brings the sparkle back on the Seventy-Two with Hard Candy Big Red Flake paint. This new finish is created by applying a black base coat, followed by a polyurethane system that carries hexagon-shaped flakes that are more than seven times the diameter of metal flake used in typical production paint. Each flake is coated with a thin aluminum film and then tinted red. Four applications of clear coat, combined with hand sanding, create a smooth finish over the flakes.

“The final touch to the Hard Candy Big Red Flake paint is a logo on the tank top and pinstripe scallop details on both fenders,” says Savage. “Each was originally created by hand, and we recreated that art in a decal for production, so they still have the appearance of hand-applied graphics in that they are not exactly perfect. The graphics are then covered with a final clear coat application.”

A solo seat and side-mounted license plate bracket leave much of the chopped rear fender – and more of that paint – exposed on the Seventy-Two. The powertrain is finished in Gray powdercoat with chrome covers and a new round air cleaner with a dished cover. A classic Sportster 2.1-gallon “peanut” fuel tank adds a final period touch to the motorcycle.

Key features of the 2012 Harley-Davidson® Seventy-Two™ include: