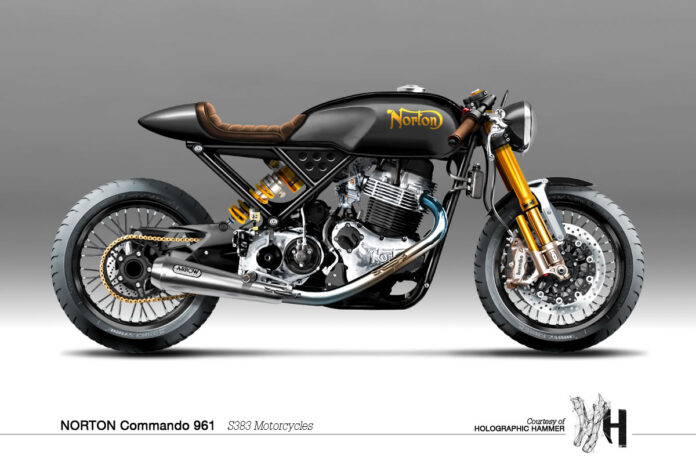 Sylvain Berneron works as a designer for BMW Motorrad in Munich, he started riding Motocross when he was just 8 years old and has continued to ride and race ever since. “Bikes are all I know and that’s what I live for” he says.

Recently Sylvain launched his Art page on Facebook called Holographic Hammer. Here he is to tell us all about it “Building a custom bike takes a lot of time and money, as a designer I realized that the first idea is rarely the best. Perfection comes with exploring different options and trying unusual things. All my friends ride or work in the custom motorcycle business and I was always around them to quickly Photoshop their garage builds, and make them logos.

That is the meaning of Holographic Hammer, a digital tool helping and simplifying the manual labor. I am convinced that doing a sketch before building helps to get the global proportion right and stay on track while doing it. Because you can easily get lost redoing the same part again and again until it works.

It doesn’t matter if the bike is going to be built or if it’s just about making a cool picture, I am always having fun drawing custom bikes for friends. That’s how I ended up sketching for El Solitario MC, Untitled Motorcycles, Fuel Bespoke, Icon 1000,  Lucky Cat Garage and Derestricted.

If you would like to visualize your dream custom bike or simply see some cool shit? Make sure you check Holographic Hammer on Facebook and I will be very happy to sketch it up for you!” Sylvain Berneron ~ Holographic Hammer

As I am getting ready to embark on my own first custom project I think I will be taking you up on that offer Sylvain!!