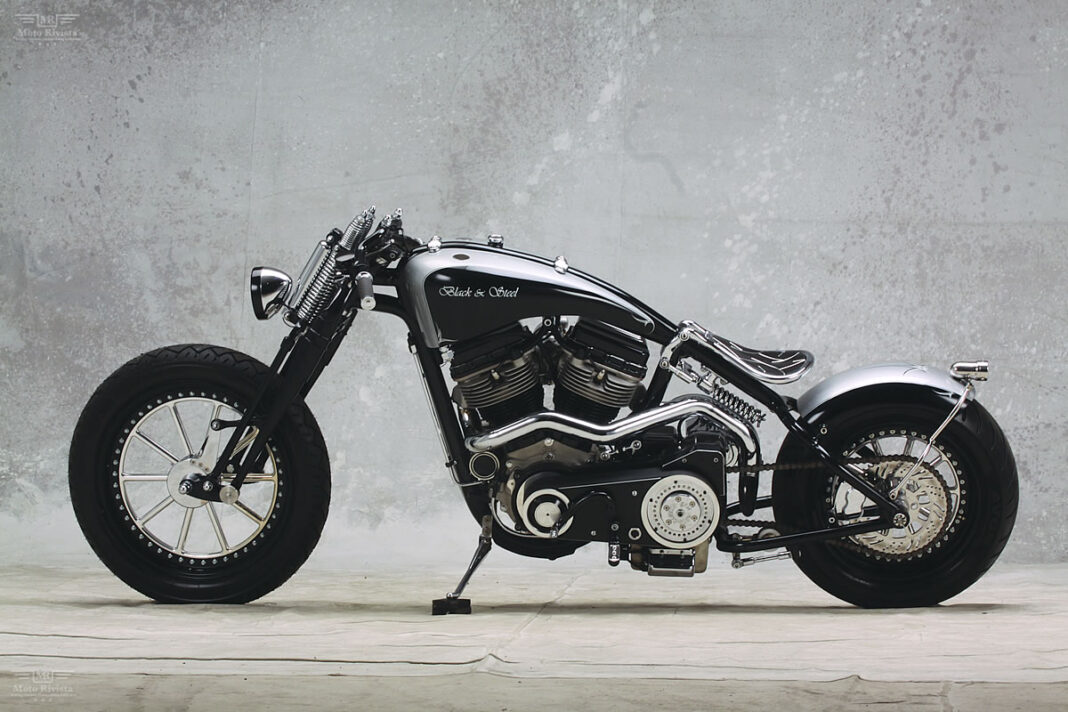 The Russian custom scene has started appearing on a global scale, workshops like Fine Custom Mechanics have entered the AMD championship to show the world the flavors of Russian craftsmanship.

Fine Custom Mechanics is a custom shop based in Moscow, Russia owned and operated by Dmitry Motkov. When it comes to custom bike building usually builders look in their own backyard for inspiration but Russia does not have the rich heritage of custom bike building like USA and Europe does.

The motorbike culture in modern Russia is spreading widely with world renowned Harley-Davidson spreading their roots in Russia, allowing custom bike builders to have easy access to stock H-D bikes. The feature of today is Bender, inspired by the ever popular board tracker look. The build started with Dmitry welding up his own single look gooseneck rigid frame. Following the latest trends Dmitry designed it to carry the oil in the main tubes too, and the chassis was completed with bolting on a replica of Springer fork.

Back in the old days communism restricted a lot of older Harleys being imported into Russia. But modern Russia is more flexible allowing easy access to the US suppliers, for this build Dmitry sourced a Pandemonium 88ci engine which was perfect for the board tracker look. Bender also features a few aftermarket parts including a BDL primary and a RevTech six-speed gearbox.

Bender rolls on German Rick’s 19in front and 16in rear wheel fitted with 360 front brake and a combined brake disc and rotor at the rear. All the bodywork for Bender, the gas tank and rear fender were produced in-house at Fine Custom Mechanics including the sprung solo seat.

The details of Bender are flawless and display great craftsmanship from this Russian workshop. Bender was not the winner of the 2009 Freestyle AMD Championship, but it was well appreciated by builders across the globe.