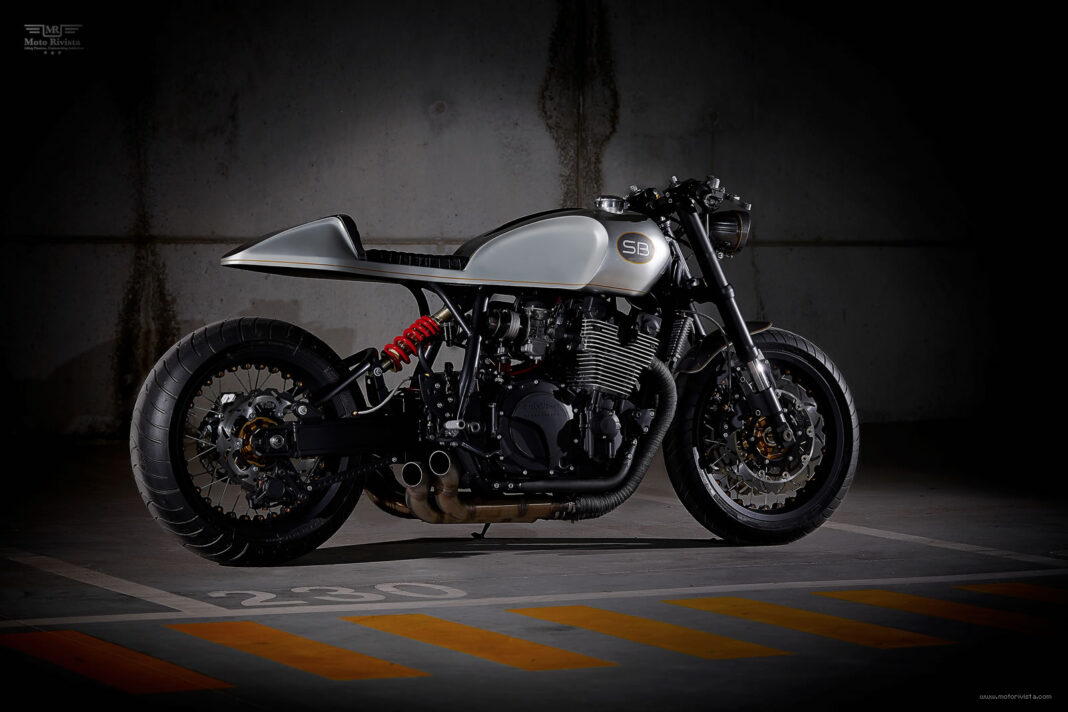 Portuguese custom motorbike builders ‘it roCkS!bikes’ made their first appearance on Moto Rivista with their custom Honda CB750. They are back again with their latest build, a striking custom Yamaha XJR 1200 aka Sunburn.

‘it roCkS!bikes’ is the work of Osvaldo Coutinho and Alexandre Santos. According to Osvaldo & Alexandre “This was a commissioned bike. While we were finishing the Gravedigger we had a secret desire to fully customize a Yamaha XJR 1200 and the shape was already in our minds. When the buyer first asked us to build a special bike for him we proposed this donor and he was right on it.

The base for the build was a 1997 Yamaha XJR 1200. Since the original bike is big and heavy (about 233kg), our main focus was to reduce its weight and size. All the parts of the bike were disassembled and from the original bike we only kept the engine, part of the frame and the swingarm. The weight loss cure kept it slightly below 200kg. At the front of this custom Yamaha XJR1200, we fitted both an inverted fork and brake calipers, from Yamaha YZF. On the rear, we got rid of the original double shocks and fitted a monoshock. To do this, we had to cut all the rear section of the frame and reinforce its upper section above the engine to bear the damping loads. Simultaneously, the swingarm was modified to cantilever. The original air box was removed and we designed our own set of velocity stacks with filter, custom built especially for this project, in CNC metal plates. The loud exhaust on this Custom Yamaha XJR1200 is a  handmade stainless steel piece 4-4, with thermal wraps in the headers. No db-killer or even mufflers were allowed in this bike, it roars and spits fire like an old school race engine!  Since the air flow was fairly improved, the carbs were re-jetted and properly tuned, allowing a 12-15 horsepower gain. The oil cooler is a high performance PWR 280x110x19mm and the oil lines come from Goodridge.

The braking system of this Custom Yamaha XJR1200 has new 320mm floating disks on the front and 267mm on the rear, brake hoses from “Goodridge”, with gold fittings, and the Swedish “ISR” adjustable master cylinders.

We used a digital dashboard from Motogadget motoscop pro, with several information like revcounter, speedo, 0-100km/h acceleration, g-meter. This unit was mounted in a recessed aluminum bracket designed by us and cut into CNC, in which was painted the name of the bike Sunburn.

Adjustable footpegs and clip-ons were fitted, as well as  the aluminum Monza gas cap. On the front we prefer to use a more old school headlight, painted on the dominant color of the bike. The turning lights are Motogadget m-Blaze cone, and the controls are Motogadget m-Switch. Not to spoil the rear view, the license plate was mounted on the left side and the taillights are just 2 single Led’s that are bolted to the license plate.

As it has become our trademark, the gas tank, seat and rear section of the bike are one single metal piece that can be lifted by loosening one single screw. The seat is an exclusive handmade black leather piece. All the paint job and color schemes were done with airbrush and then sprayed with a thin layer of glossy varnish on the top and matte on the sides.

The finished Custom Yamaha XJR1200 feels very light and the engine turned out a powerhouse, right as we wished for, a true cafe racer! Below 5.000rpm, the engine seems a bit asleep but from here, it just shoots up to the red line… always pushing us to go faster!”