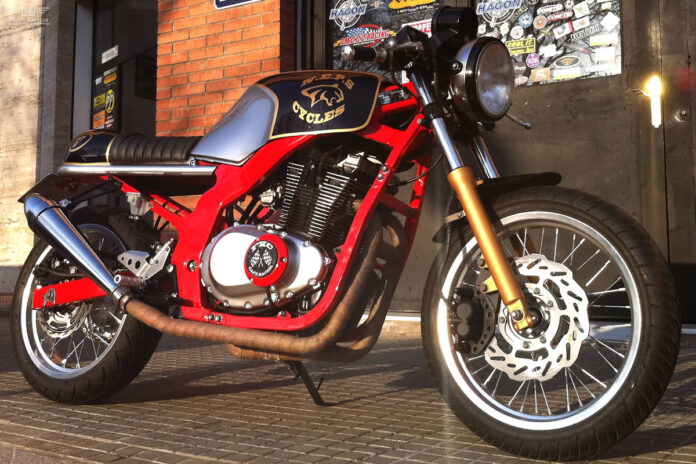 Free Kustom Cycles in Spain started life in 2003 as an accessories and gear shop and then began building bikes in 2009. Dealers for Mooneyes and many other brands, Free Kustom Cycles are also able to build any kind of motorcycle you want including choppers, bobbers, cafe racers and more.

Today’s bike is the first cafe racer project from Free Kustom Cycles, a Suzuki GS500 called ‘NEPS Cycles’. Built for a customer Ruben, who had specific requests for this build and also gave this cafe racer it’s name NEPS Cycles which stands for ‘NADA ES PARA SIEMPRE’ or in English ‘Nothing is Forever’.

We asked Marcos Vazquez owner of Free Kustom Cycles a few things about his project build and here is our summary of what he told us…Thanks Marcos! The build started with the removal and sandblasting of all the parts to be used again including the chassis, bottles, seat posts and others. Next was a quick re-assembly in a rough appearance and modifying parts to make sure at this stage the bike resembled the look Ruben was hoping for.

The frame was heavily modified and all the unnecessary parts grinded off to make it as clean as possible. The tank was modified by adding a few plates on the front, which also adds the classic flavor of the café racer to this build.

The Suzuki GS500 engine received a facelift, the cylinder was upgraded and painted with black heat resistance paint. All the edges of the cylinder were ironed out to give it contrast. The caps, engine and the cylinder heads were painted with silver. The carburetors were cleaned and a new air filter was installed. The exhausts of this café racer was soured from a URAL bike, which was shortened and features new brackets to hold on each side of the bike.

The rear fender was hand fabricated by Free Kustom Cycles and features a Midnight Rider seat. The standard aluminum rims where changed for 17″ spoked wheels. The rear of the bike houses all the electrics, battery, fuse box, electrical connections and the taillight.

The theme of the painting for this bike is classic, Ferrari red was used to ensure it would command attention, black and bright silver contrasted beautifully and the gold on the logo and detailing added the finishing touches.